Dykes To Watch Out For 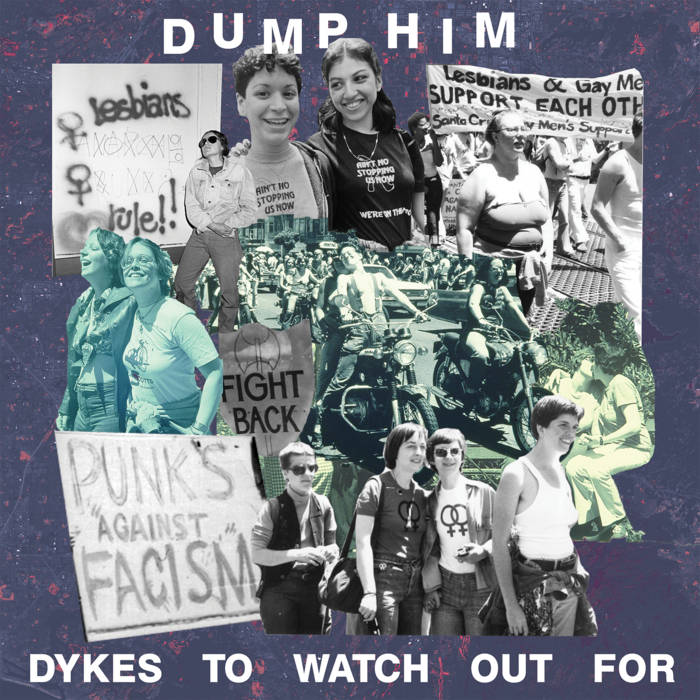 Hopey🌈💛🖤☠️ I'm so late to the party, but I've never been more ecstatic to buy an album out of the QUEERCORE tag. Thank you, Dump Him, for your masterpiece of punk 💛 Favorite track: What's Yr Deal With Kim?.

salsa/sirasha it’s impossible for me to pick a favorite track. this album captures so many things that i feel on a daily basis perfectly, and everyone in DUMP HIM are amazing! song for frankie and blinko is so fucking relatable, but so is puritan. and don’t kiss me. and DTWOF.

ArcaneJane ♠️ Some great songs here. worth checking out for sure. Favorite track: Dykes To Watch Out For.

gwynsanity Amazing heartwarming album - some real moving new ballads and some classics with a real pulsing sound - looking forward to the vinyl - I can barely pick a fav track Favorite track: What's Yr Deal With Kim?.

danmorris I was lucky enough to find this on Bandcamp, and I've now listened to to it like 50 times. It's got perfect punk energy without falling into any punk stereotypes. It's everything I want from high-energy, smart, political-and-personal rock music.

“I refuse to fucking recreate / dichotomies of real and fake,” shout all four members of DUMP HIM in unison. “What got us here in the first place.” It’s hooky and muscular, an all-caps refrain that plays out like a mission statement, a centerpiece of “Dykes to Watch out For,” the title track from the Massachusetts queercore group’s debut LP.

Dykes to Watch Out For is an album filled with such cathartic refusals: refusals to perpetuate cycles of harm, to be shamed for who you are, to be satisfied by a world that’s failed you since birth. Throughout, the members of DUMP HIM impressively twist and turn their phrases, puzzle-piecing precise processing of gender dysphoria and queerness into full-speed-ahead melodies — placing the band in a tradition of punk women and queer folks making emotional, poppy music, bands like Longstocking and Team Dresch (who they’ll open for this fall)

Throughout, there are explosive excavations of how trauma from past abuse affects relationships (“Trash”), and reckonings with the aftermath of cutting people out who don’t respect your boundaries (“Ache”). There’s one of the sharpest-ever-written punk-pop indictments of the relationship between capitalism and the climate crisis—“Lately I can’t look at the sky / without thinking about how soon we’re gonna die,” they sing on “Judi Bari Almost Died for Our Sins,” a nod to the Earth First activist framed by the government in her own attack by firebombing. There’s granular, introspective storytelling paired with tear-it-all-down system critique.

On DTWOF, DUMP HIM firmly asserts a collective voice, writing collaboratively as a group for the first time and all singing lead at different points, with a line-up comprised of guitarists/vocalists Jac Walsh (they/them) and Mattie Hamer (she/they), bassist/vocalist Otto Klammer (they/them) and drummer Larz Brogan (they/them). On the title track, Walsh and Otto seamlessly take turns on lead vocals, each singing their own verses, while the whole band sings the chorus. Its an anthem that simultaenously feels searing and celebratory, looking to remnants of the past for guidance on “navigating the creation of one’s own non-binary lesbian identity… and giving others the space to explore their own identities in the same way, whatever they may be,” says Walsh.

“What was it like to only get to be yourself / in strips of film and black and white negatives?” asks Otto, in the second verse, in homage to the prolific late 19th century photographer Alice Austen, who documented herself, her long-term partner and friends in ways that were especially radical in her lifetime. “Her story touches on language surrounding queerness, how she probably like so many of our elders did not identify as anything other than perhaps a gender outlaw,” Otto explains. “It used to be really taboo to document anything like she did. There is so little documentation and history for LGBTQ+ people.”

DTWOF brims with lyrical references to historic queer artists and writers. The album title refers to the Allison Bechdel comic of the same name, while the lyric sheet references Radclyffe Hall’s 1928 novel “The Well Of Loneliness” and Adrienne Rich’s 1976 poetry collection “The Dream Of A Common Language.” The tracklist and lyrics include easter-egg nods to influential lesbians and non-lesbian lesbian icons like Claude Cahun, Dorothy Alison, Stevie Nicks, and Lucinda Williams. “The cover kept with the theme of the record in a very purposeful way,” says Walsh. The collaged art, created in collaboration between the band and Felix O’Connor, incorporates protest photography and images from the Lesbian Herstory Archives. “We wanted the cover to feature archival pictures of lesbians from before we were even born, partly as a way to honor folks who paved the way for us, and partly because of all the references that our songs and titles have to lesbian art and literature.”

DUMP HIM started as Walsh’s solo project in 2015, and then morphed into a loose, rotating cast of friends joining the band here and there (eighteen folks have played in the band, to be exact), slowly settling into the current tight-knit group by 2018. The album was recorded in three days on the North Shore of Massachusetts, at Salem’s Godcity Studio with friend and collaborator Zach Weeks (who also mixed/mastered the record, contributed production tips, and ripped a solo at the end of the title track).

Through DTWOF’s grounding in history, DUMP HIM’s framing of the struggles and shortfallings of queer politics in an era of so-called progress is even more impactful — like when Walsh sings, “Now we’ve got that common language to identify our pain… [but] we only use it to degrade, and we all wonder why we feel so alone?” Or on “Puritan”, when Mattie takes lead vocals and pries into the illusion of acceptance — being afforded space but not too much — “Nobody here minds, what the fuck I look like / as long as I don’t speak or if I do it’s not about collective bargaining,” they sing breathlessly.

Album-closer “Don’t Kiss Me, I’m in Training” ends the record on a subtly devastating note, with Jac and Mattie trading leds, and Briar Lake of the band Printing Shed (who the band quotes in the song) contributing backing vocals. “Don’t wanna die alone / the world's gonna end soon,” Mattie sings. It’s a mid-tempo pop reflection summarizing several of the album’s themes: the difficulty of fully loving the people around you in the aftermath of trauma, the struggle of forging relationships and communities as the world literally crumbles. - Liz Pelly

Out on Musical Fanzine Records + Get Better Records.

You can order a record or CD here. To order a tape, head over to the Get Better Records bandcamp: getbetterrecords.bandcamp.com

All physical copies of DTWOF will include a 50+ page zine about the album made by us, including liner notes, pics, and more.

Recorded & mixed by Zach Weeks on the beautiful north shore of eastern Massachusetts, usa at GodCity in Salem, MA.

Zach Weeks played the solo on Dykes
Briar Lake sang the harmonies on Don't Kiss Me
Mattie sang leads on Puritan & Don't Kiss Me, Otto sang the second verse of Dykes, James sang the rest of the leads, and we each wrote the lyrics we sang.

Front cover collage, back cover drawing, and all design by Felix O'Connor.

"No Stopping Us Now" by Bettye Lane + "Lesbians Rule" by Del LaGrace Volcano photos on the cover taken from the Lesbian Herstory Archives digital collection. Both images used with permission from LHA + the artist, respectively.

Bandcamp Daily  your guide to the world of Bandcamp

Cannibal Corpse's George "Corpsegrinder" Fisher stops by for an interview